The Barnsley Football squad were given a short presentation on the dangers of legal highs on Thursday, 20 August after training at the Oakwell Stadium in Barnsley.

Representatives from the South Yorkshire Police and Crime Commissioner’s Office and Project 3 explained to the players including the captain Alfie Mawson and regular team players Sam Winnall and Connor Hourihane, the emerging issue of legal high usage within young people across Barnsley and South Yorkshire. 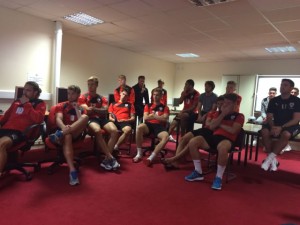 The presentation was the start of a big campaign to run across Barnsley and South Yorkshire that will see the popular footballers providing key messages to young people and their parents through social media to be launched in October.

Led by Police and Crime Commissioner Dr Alan Billings the campaign will be part of a partnership initiative involving Barnsley Football Club, Rotherham United, Sheffield United and Sheffield Wednesday. It will highlight the important issues surrounding the use of legal highs and the key message that legal does not mean safe where legal highs are concerned.

Dr Alan Billings said: “The use of legal highs across South Yorkshire is becoming a significant concern. The young people engaging in such activities are putting themselves very much at risk as they are not understanding that because these substances are tagged as legal, they are very dangerous and could affect a young person’s future in a number of ways.

“I would like to thank Barnsley Football Club and all of the players for agreeing to work with us on the campaign. We need to engage with these young people and help them understand what they are doing and what better way than with the help of these footballers who they all look up to.”

Legal Highs are manufactured and designed to mimic the effects of well-known illegal recreational drugs such as cocaine, heroin and cannabis. The health risks are greater than regulated illegal substances and the chemical compounds are changing all the time. A person’s reaction to taking these substances could be different every time and although the understanding is that they are legal, they can often be found to contain some illegal substances meaning the criminal consequences would be the same as being found in possession of an illegal drug.

Ben Mansford, Chief Executive of Barnsley Football Club said: “Barnsley Football Club is committed to working on this campaign. The players have a full understanding of the dangers that using these substances can bring on a person’s future. We have a squad full of young, talented, influential players and they will do everything they can to ensure this message is directed to those at risk and their parents.