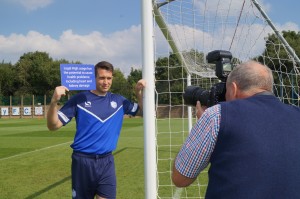 Taking part in a photo-shoot at their training ground a number of players, including new summer signings Fernando Forestieri and Barry Bannan, displayed key messages on boards for photos that are soon to be used in a large scale social media campaign led by the Police and Crime Commissioner Dr Alan Billings.

Dr Billings said: “We are really grateful to Sheffield Wednesday for supporting this campaign.  Legal Highs are extremely dangerous and we need role models like footballers to help educate young people and their parents that legal does not mean safe where legal highs are concerned.

“Many parents may be aware that their children are taking these substances, but because they are labelled ‘legal’, assume they are safe.  This is not the case and quite often it is not known what substances young people are actually taking.”

Legal highs come in bright attractive packaging and are labelled ‘not for human consumption’, but this is often ignored by young people who take them to mimic the highs of cannabis, heroin and cocaine.

Glenn Loovens, Sheffield Wednesday’s team captain said: “The team are really keen to support and promote this campaign.  These Legal Highs can obviously be very dangerous and can cause serious health issues.  I hope that by displaying these important messages, we can offer the opportunity for kids to think twice before they consume these substances.”

The legal highs campaign is due to start on social media in early October and will include images from all five South Yorkshire Football Clubs, Doncaster Rovers Belles and Sheffield Steelers Ice Hockey Team.